If you have been searching for a used diesel Volkswagen, you will have most likely seen a BlueMotion badge and maybe asking what is VW BlueMotion? And is it worth having?

Volkswagen dropped the BlueMotion brand within the new lineup as many of the features previously only available as a BlueMotion upgrade became included within new diesel VW vehicles. However, if you are shopping for a used dub, you will most likely see the BlueMotion badge proudly stuck on the rear just below the engine classification.

The BlueMotion (BMT) package included several eco-friendly diesel fuel-efficient core features. The exact details for each model will differ depending on the manufacture year, engine and region. However, in general, all BlueMotion Volkswagens included the following impressive features.

You will instantly recognise this feature when driving. The stop/start technology reduces diesel fuel consumption by turning your engine off automatically when stationary. This may seem odd if driving a BlueMotion vehicle for the first time. However, this technology reduces noise, helps to decrease harmful emission gases and will increase fuel efficiency. Stop/start will only act under certain conditions, such as when your engine has warmed up and can be affected by AC operation.

There are special servicing requirements related to the stop/start technology, such as the purchase of suitable replacement batteries and servicing using suitable oils. Stop/start has become common with most modern vehicles so rarely results in any servicing issues.

Recovering power from braking by increasing the output of the alternator to recharge the vehicle battery, this helps increase the life of the battery and also means that the vehicle can reduce the alternator load while accelerating. So helping to decrease the overall engine load, diverting more power to drive the wheels when needed, and so increasing efficiency.

Special tyres with rubber that generates less friction, by reducing the tyre friction needed to accelerate it is possible to lower the engine load. By drawing less power from the engine, BlueMotion Technology low-rolling-resistance tyres can deliver improved diesel fuel efficiency. This will only apply if the correct tyres are fitted.

To decrease wind-resistant VW BlueMotion Technology vehicles have improved aerodynamics, this will be dependent on your model but can include tighter panel gaps, lower ride height, unique bumpers and rear spoilers. Many of the aerodynamic design modifications are subtle and hardly noticeable but can increase vehicle efficiency by reducing air resistance. Another added benefit when improving air-flow is reduced cabin noise.

Image thanks to Michi1308

While Volkswagen offered BlueMotion Technology BMT as an option across most variants, the special VW BlueMotion model was a different vehicle. Volkswagen launched these VWs as a dedicated eco-environmental friendly range of their mainstream standard vehicles. Commanding a hefty premium when new, the BlueMotion model lineup was a niche vehicle showcasing Volkswagen’s latest efficiency technology.

The 2006 mk4 Polo was the first car to wear the BlueMotion model badge; later followed up with variations such as the 2007 Passat BlueMotion and 2008 Golf/Rabbit BlueMotion which was capable of achieving a claimed 88.3mpg.

Volkswagen even registered the Passat 1.6 TDI BlueMotion achieving a record-breaking 1,526.63 miles (2,456.87 km) from a single tank of diesel fuel, acknowledged by the Guinness Book of Records.

VW’s BlueMotion model lineup was an exciting innovation within Volkswagens eco-friendly and efficiency development. Still, they rarely provided many benefits for owners when new compared to their extra purchase price. However, if you are after something off-beat and modern, they merit seeking out.

Is BlueMotion worth the extra cost?

Vehicles fitted with BlueMotion Technology BMT are quite common and do offer some benefits. If you like the idea of the added aerodynamics and efficiency features, you could find a BlueMotion vehicle perfect for your needs.

In the UK BlueMotion BMT vehicles were a popular option due to their road tax savings. For example; a VW Up BMT with reduced Co2 emissions 98g/km would benefit from free road tax. This is a healthy saving on the yearly running costs when compared to an equivalent standard model. It is common for all BlueMotion BMT vehicles to be classed a grade lower than their comparable standard model, thus saving hundreds each year on road tax while benefiting from better fuel economy.

There is a significant price difference between the BlueMotion technology and BlueMotion model. As such, used BlueMotion model vehicles command a small premium on the used market with other than exclusivity factor little difference in desirability to their BlueMotion BMT equivalent. From the available car reviews online, it seems that the mainstream BlueMotion BMT Volkswagen offers the best combination of economy and style with a tiny premium over the equivalent standard model offering a perfect purchase when bought used.

What is VW BlueMotion Golf? Volkswagen released the BlueMotion Golf/Rabbit in 2008 as an eco-friendly and efficient model which was capable of an impressively claimed 88.3mpg.

Is BlueMotion worth having? Having BlueMotion provides you with a more fuel-efficient diesel vehicle with advanced technologies for a small premium on purchase.

What does BlueMotion mean? The BlueMotion name was developed to mark Volkswagen’s range of eco-friendly efficient models and was offered as an option across most models in the VW lineup. The name came from the blue in Volkswagen’s brand identity, and motion added for mobility. BlueMotion was VWs alternative to DaimlerChrysler’s BlueTec, SEAT’s EcoMotive and Sokda’s GreenLine.

Which Volkswagen Commercial Vehicles feature BlueMotion? The VW range of commercial Multivan, Transporter and Crafter vehicles were all available as a BlueMotion model and BlueMotion Technology BMT variants. The BlueMotion engine seems a logical choice for any vehicle travelling thousands of miles each year, that’s possibly why many traders people opted for the diesel fuel-efficient BlueMotion.

Does BlueMotion need AdBlue? Having BlueMotion does not mean that the vehicle will need AdBlue. AdBlue is a solution of urea and deionised water sprayed into the exhaust system to break down harmful nitrogen oxides (NOx) gases. The Euro6 engine introduced around 2016 added AdBlue, you can tell if the vehicle uses AdBlue by the presence of a secondary AdBlue filler cap typically next to the diesel filler hose. 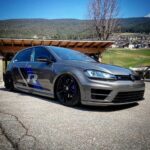