What is a Volkswagen Caravelle?

Few vehicles are as versatile as the Volkswagen Caravelle, from a workday warrior, family bus to holiday campervan. The Volkswagen van has a configuration for all occasions.

So the question you may be asking, so what is a Volkswagen Caravelle? The Caravelle is Volkswagen’s posh van for transporting people rather than cargo. More than just a people carrier, MPV or minibus. While lesser MPVs may carry up to seven people at a squeeze, the VW Caravelle can carry passengers in comfort along with their ample luggage. The Caravelle provides the luxury of riding in an executive lounge with space for a large family while looking cool in a veedub.

If you need a luxury family vehicle, few compare to the Volkswagen Caravelle. Options such as the Mercedes-Benz Vito or V-Class may have the style, but these vans lack the heritage or classless status of the friendly VW bus.

The VW bus has always been an important model within the Volkswagen lineup, being nearly as old as the VW brand its self. As Volkswagen’s second model to come out of Wolfsburg after the original Type 1 Beetle, the folklore surrounding the VW bus is long and detailed. However, for this post, I will keep it short.

The Volkswagen bus was bought to VW as a concept by Danish VW importer Ben Pon. Ben had seen the Type 1 chassis being used to move parts and was inspired to sketch designs for a van body. On seeing these designs, Volkswagen’s engineers were prompted to develop the VW Type 2 (T1) van. Giving birth to the VW Type 2 bus.

The Type 2 van was launched in 1949 using Type 1 mechanics and is generally considered a forerunner to the modern-day cargo van. The first VW bus was a huge success due to its versatility, becoming known in the United States of America as the “hippie bus” due to its popularity with the 1960s counterculture movement. Other names used for the original VW Type 2 included “Samba bus”, “Kombi”, “Microbus” and “Bulli”.

Compact commercial vans such as the VW Type 2 (T1) and Ford Transit (launched in 1965) reshaped transportation in the UK. Before these vehicles, if you wanted to carry large items via road, you needed a heavy goods license. But, heavy goods licenses were only issued by haulage companies and as such licenses were challenging to obtain. Compact vans such as the VW T1 could be driven on a standard car license and so enabled many independent tradespeople to move goods, starting a new industry of delivery drivers.

The VW T1/T2 had become renowned as a commercial vehicle and practical people carrier developing a new automotive segment. Volkswagen had identified a new type of customer who enjoyed the car-like driving style with size and versatility to carry a family, so launched the T3 and VW Caravelle in 1979.

The T3 was a basic bus when compared to today’s Caravelle, but what it missed in terms of features it more than made up for in retro style. Introduced in 1979, the air-cooled T3 (also confusingly known as the T25) featured rounded headlights and a seven-seat arrangement which would set the Caravelle format for future generations.

The Caravelle seating configuration placed two rows of single seats towards the front. At the same time, at the rear, there were options of either a rear bench seat (which could be turned into a bed via a rear shelve) or the “deluxe” Caravelle Carat model which featured two single forward-facing rear seats and 180deg swivel middle seat arrangement.

Throughout production (1979 to 2002) the T3 underwent many mechanical and style updates. In 1983 VW replaced the now old fashioned air-cooled engine with a Wasserboxer 2.1 water-cooled engine. 1986 saw style changes in the form of updated fibreglass bumpers and rectangle headlights and 1991 marked another engine update in the form of a five-cylinder Audi unit. The T3 was available as a manual, automatic and even all-wheel-drive Syncro.

Typical of German vehicles of this era, the initial T3 specifications were short in creature comforts. With items such as a glovebox, digital clock and electric windows all being extra. However, if you were the lucky owner of a Caravelle GL model you could enjoy the “cut-pile carpet”, “velour trimming”, “adjustable armrest”, “rear ventilation” and even optional sunroof and compact-fridge. The Caravelle was the luxury posh people carrier of the T3 range with the added ability to be used as a light weekend campervan.

The Volkswagen T4 was a step-change for the Caravelle, gone were the characterful rear-engine layout and awkward driving position and in came the modern front engine and car-like driving posture. The all-new platform was to run for nearly 14 years, being sold between 1990 and 2003.

The T4 Caravelle provided increased comforts such as dual-zone climate, air-conditioning, cord upholstery and deep-pile carpets. VW launched the 1990’s Caravelle into a competitive MPV marketplace where it faced opposition from the likes of the Ford Galaxy and Volkswagen Sharan.

Seen as a sophisticated and talented luxury vehicle, the VW T4 Caravelle was enjoyed by hotel taxi and limousine drivers. By the end of production, the commercial underpinning of the VW T4 Caravelle had made it difficult to compete with the new Mercedes-Benz Vito. Volkswagen had established a strong reputation with the T4 which has seen the fourth-generation Caravelle and Transporter become a popular choice with classic retro vehicle owners.

Volkswagen’s fifth-generation Caravelle featured an all-new design. Once again, we saw an increase in comfort and a more car-like driving arrangement. The gear lever was no-longer fixed to the floor, being relocated to the dashboard. The all-new T5 was an attractive looking vehicle which while not game-changing like it’s predecessor the T5 was a worthy upgrade.

The T5 platform was launched in 2003 and is still used as the basis for the current T6.1. The T5 Caravelle was interestingly never officially sold in North America due to a 25% tax (also known as the chicken tax) placed on imported light trucks. Instead, the US market received the Chrysler-built Volkswagen Routan.

The VW Caravelle was once again available in short and long-wheelbase configurations and featured many safety features such as traction control, ESP and ABS. As a luxury model, the Caravelle also contains lumbar support, air conditioning, heated mirrors, armrests and optional automatic tailgate and electric closing sliding doors. The VW T5 Caravelle is capable of transporting up to nine (ten with a front bench seat) people.

There have been many upgrades throughout the production of the T5, 2009 saw Volkswagen restyle the front end and update the dashboard. The T5 also received a BlueMotion Euro5 engine upgrade and the introduction of the Direct-Shift Gearbox (DSG) plus 4MOTION.

The T6.1 once again received a mid-life update in 2020, including revised front-end grille, bumper, lighting and styling. The interior dashboard was replaced with a sophisticated “We Connect” internet-enabled infotainment system for the first time in a production Volkswagen Commercial Vehicle. Mechanically the new T6.1 received electromechanical steering, which includes lane-keeping assistance and crosswind assist.

What is the difference between Caravelle and Multivan? Volkswagen’s Multivan is a range-topping model featuring all the people carries luxurious found in the VW Caravelle with the added features needed in a family weekend campervan. The VW Multivan adds more leisure features, such as a flexible rail system for seating adjustment, making for a perfect family-oriented vehicle.

What is the difference between a VW Transporter and a Caravelle? VW’s commercial Transporter was designed to transport goods, while the Caravelle was a variant of the VW van designed to carry people. This means that each model has a different official classification which dictates permitted maximum speed, tax and carrying capacity.

What is the difference between Caravelle and EuroVan? Volkswagen introduced the T4 into North America as the EuroVan, with the marketing tagline “EuroVan: There’s nothing mini about it”. The Volkswagen T4 receiving disappointing sales which combined with the added 25% tax levied on light imported commercial vehicles explains why Volkswagen never offered the T5 Caravelle/EuroVan in North America.

What is the difference between the VW Caravelle and Shuttle? The VW Shuttle is a Transporter derived minivan; the Shuttle van is considered a practical vehicle without the poshness or luxury found in the higher end VW Caravelle. 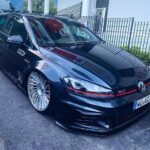